Home > Blog > Claiming a Seat at the Table: An Interview with Floyd Mori 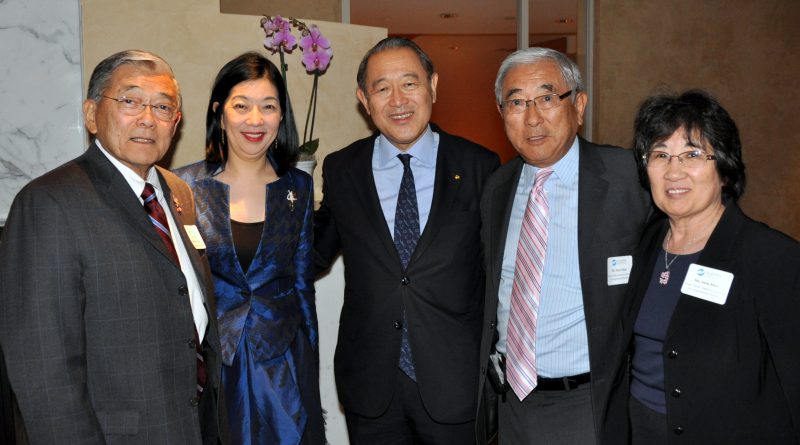 Floyd Mori is currently the president/CEO of the Asian Pacific American Institute for Congressional Studies and previously served as national executive director/CEO of the Japanese American Citizens League (JACL). He has served on numerous committees and boards. He does extensive volunteer work, which includes serving on the steering committee of the National Veterans Network and as chairman of the National JACL 2013 Convention to be held in Washington, DC.

He has received various awards and honors, including the Order of the Rising Sun, Gold Rays with Rosette award from the Government of Japan. Before he moved to Washington, DC, he taught economics at Chabot College in Hayward, California, for ten years.  He was elected to the city council for the City of Pleasanton, California and then became mayor of Pleasanton. Mori was elected to the California State Assembly in 1975 where he served for six years. He was director of the California Office of International Trade and later spent more than thirty years in private business and as an international business consultant.

Cindy Dinh is a first-year JD/Master in Public Policy candidate at the John F. Kennedy School of Government at Harvard University and the University of California, Berkeley, Boalt Hall. She is interested in the nexus between health, law, and policy, especially among immigrant populations and those with limited English proficiency. A native Houstonian, she graduated magna cum laude and Phi Beta Kappa from Rice University majoring in sociology and policy studies. While at Rice, she successfully petitioned and reinstated an Asian American Studies course that had not been offered in more than ten years. She edited the campus newspaper, was named a Harry S. Truman Scholar, volunteered to teach Vietnamese language and culture, and served on the board of the Houston chapter of OCA, a national Asian American social justice organization. Dinh co-invented the DoseRight Syringe Clip and has been published in Research in the Sociology of Health Care and Annals of Biomedical Engineering.

AAPR: Everyone has a life trajectory, starting with “this is what I want to be when I grow up.” What was yours, and how has it changed?

MORI: I knew what I didn’t want to be. I didn’t want to be a farmer. Of course, like all the Asian parents, I was encouraged to go to school. I was number seven of eight kids. And I had three older brothers, two of whom went to WWII. One got killed and never came back. They didn’t take all the brothers. Some were left to work with my dad on the farm. It was hard, physical work. My older brother and sisters never really had a chance to go to college. So I was the first one to graduate from a four-year college. My oldest brother who got killed was supposed to be an electrical engineer. So Mom told me, “You have to be an engineer.” So I studied math. And I took an economics class. It was fun; it was public policy; it was about people. So in college I thought I’d do international business. But I was offered a fellowship my senior year and I got to teach economics. When I graduated, they offered me to teach, and I taught in California. So my first ten years was as a professor of economics at a community college. The intent was to go to California in the Bay Area. There are a lot of choices in graduate work there.

Teaching wasn’t something I thought I’d do. It is very rewarding, not monetarily, but joyful. So I taught in economics, which is a lot of policy stuff. The theme that I had was to be a good, enlightened citizen. So trying to practice what I preached, I decided to run for local government office. That was when I ran for city council [of Pleasanton]. It was my decision to run. People didn’t come and tell me, “Floyd, would you run?”

MORI: I wasn’t involved that much. I was relatively new to the city, three to four years living there [in Pleasanton]. It was a bedroom community that was just developing. It was an old city, kind of like a cowboy city. But it was growing, a lot of new subdivisions. There were a lot of new people in the city, like me. But it was the old guys running the city. So I said, “We need a new direction.” I could talk a lot about the issues of economic growth, balance, tax base. A lot of things I talked about made sense. I was unknown when I turned in my papers to run. Two months later I got the most votes out of twelve candidates.

AAPR: How did you transition into the private sector?

MORI: I served three years in the [California] General Assembly. It was an era of economic issues and a time of Japanese expansion in the United States in the sixties and seventies. Plus, being the Asian face in the assembly there were two of us, the first two Japanese Americans elected. I was in the majority party, and I worked a lot with Japanese companies. After three terms in the assembly, I started doing Japanese business consulting. My role in consulting was to help American businesses gain access to businesses in Japan, with new ventures. I did everything from Subway sandwiches to Pennzoil petroleum. During that era, a lot of Japanese expanded in the United States like Sony, opening plants here.

AAPR: Does the bamboo ceiling exist in certain types of industries?

MORI: In all industries. There are some industries that have a lot of Asian Americans, but they haven’t risen to management level. They’re technicians, the brains, the engineers. Take, for example, AT&T, [where Asian Americans make up a] large contingency of employees, but not in top management. We’re very underrepresented. So in my work, that always continues to be an issue as well as issues surrounding immigration. Although Japanese Americans are not impacted by immigration as much now as they were, they went through the things new immigrants do today. We continue to work on immigration issues, getting more people visibly into public office. That’s what’s APAICS [Asian Pacific American Institute for Congressional Studies] does. My job now is to broaden the pipeline for Asian Americans to enter public service, elected or otherwise. We have to be a lot more aggressive. The election of 2012 indicated to the nation that Asian Americans are critical. They’re an important voice. They’re electable.

AAPR: Are there organizations that work on expanding the potential pipeline of elected leaders?

MORI: APAICS—that’s our core purpose. Our basic purpose is to expand the pipeline through training: leadership, campaign, and public policy.

AAPR: As the new executive director for APAICS, what are your goals for the organization?

MORI: There are some practical goals. As a 501(c)3 organization, we’re educational. We can’t do any lobbying. We created a 501(c)4 organization, called the APAICS Leadership Network, to engage in a lot more political activity, thus we can get more involved in public policy, engage in national politics, and do some service for some candidates that may be difficult for new candidates to do, like polling and campaign advice.

AAPR: Has the Obama administration been helpful in creating the environment for you to pursue these goals?

MORI: Looking back, the Obama administration has been very effective in making more Asian Americans visible in high-level places than ever before, which shows that Asian Americans have a place, whether if it is administrative or elected. In the White House, there are a number of Asian Americans who are high level. Chris Lu, who is the cabinet secretary who just resigned, unfortunately. Jerry Walsh, who is a senior advisor to the president. On his mother’s side, his relatives were at [an internment] camp. So they experienced WWII and understand Asian Americans have gone through issues. Tina Tchen, the First Lady’s chief of staff. They are the more visible Asian Americans besides the ones on the Cabinet. Obama has also appointed more Asian American judges than any other president. He’s putting his money where his mouth is.

AAPR: Have you seen any recent legislative policy that has greatly affected the Asian American community?

MORI: I think the big focus on immigration policy is going to affect Asian Americans. The Affordable Care Act health care reform—Asian Americans were some of the most underrepresented and underinsured populations. Hate crime—we couldn’t get a bill through the Bush administration, but Obama signed a hate crime bill. It was one of the first pieces of legislation that he signed.

AAPR: What’s one of the most pressing issues for Asian Americans moving forward?

I think the civil rights groups are working on this a lot. I’m on the Comcast and NBC Diversity Council, and they’re the giants in terms of communications companies. We’re working with them on programming, to make sure Asian Americans are portrayed in broader society. I’m working with them on workforce development. That’s not just workers, but high-level workers. It was good to see that [Kevin Tsujihara] the new CEO of Warner Bros.is Japanese American and also some vendors. These large corporations buy lots of stuff, and they need to be more cognizant.