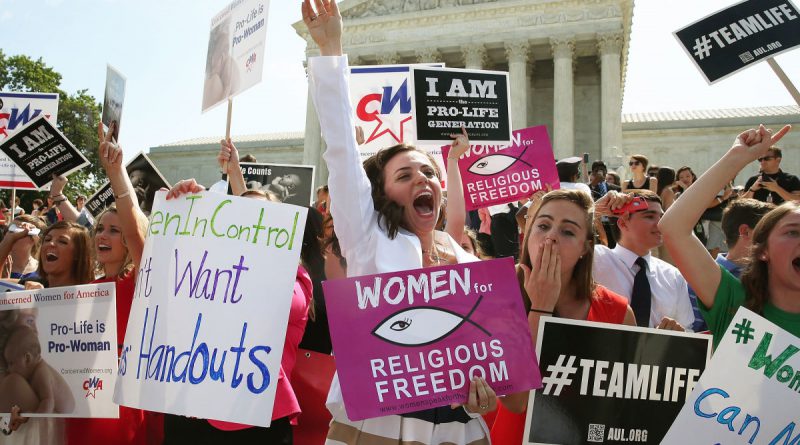 The Affordable Care Act (ACA), much like women’s health, is a point of frequent contention in Washington and the courts. On June 30, 2014, those two points converged when the Supreme Court, in Burwell v. Hobby Lobby, dealt a blow to an ACA provision specific to women’s health: the birth control benefit. i

The ACA requires that nearly all insurance plans cover all FDA-approved forms of contraceptive care at no cost to the insured. ii The provision came backed by an extensive record demonstrating the continuing need for affordable birth control. That record is replete with evidence of how financial barriers create substantial challenges for women—particularly low-income women and women of color—to utilize family planning. iii It was because of these reasons that birth control was to be fully covered by the health reform law.

But the owners of Hobby Lobby, an arts and craft store, intervened. Hobby Lobby and two other for-profit companies, Conestoga Wood Specialties and Mardel, sued the U.S. Department of Health and Human Services, asserting that their religious beliefs under the Religious Freedom Restoration Act (RFRA) were being violated. iv The plaintiffs argued that being forced to provide insurance coverage for certain forms of contraception they deem abortifacients violates their religious beliefs. v

Unfortunately, the Supreme Court agreed. In an opinion that devotes embarrassingly little analysis to the lives of women—and the pivotal role of contraception in women’s health—the Court ruled that certain businesses can opt-out of the law. The impact extends beyond the bosses at the center of the case and legal experts are still analyzing the repercussions. One thing is certain: women’s health can be compromised.

Contraception is part and parcel to women’s health

The World Health Organization views contraception as “essential to secure the well-being and autonomy of women.”vi And the Supreme Court agreed in the 1992 case of Planned Parenthood of Southeastern Pa. v. Casey, a case challenging abortion restrictions. Justice Ginsberg opened her scathing dissent in Hobby Lobby with the same instructive language she employed in Casey: “The ability of women to participate equally in the economic and social life of the Nation has been facilitated by their ability to control their reproductive lives.”vii

Since its advent in the 1960s, birth control has been one of the most pivotal developments in advancing the health, physical and economic well-being of women worldwide. As the National Health Law Program notes, birth control is recommended as part of women’s health for those managing certain chronic conditions—matters that disproportionately impact low-income women and women of color viii Women living with diabetes, lupus or heart disease, for example, must take care when deciding when and if to become pregnant as pregnancy can be a matter of life and death. ix Asian Americans are 20 times more likely to be diagnosed with diabetes compared to non-Hispanic Whites.x For these women, the risk of unplanned pregnancy can be great.

It is on this overwhelming scientific and public policy basis that the non-partisan Institute of Medicine (IOM) recommended that birth control be fully covered and provided free of charge. Eliminating out-of-pocket expenses would remove a major barrier facing the same women most at risk for unintended pregnancy: low-income women and women of color. xi

Cost barriers and general challenges accessing insurance and care are one of the reasons Asian American women have some of the lowest rates of using oral contraception, compared to all other groups (Kimberly Daniels, William D. Mosher and Jo Jones, 2013).xii A mere 56 percent of Asian American women have ever used oral birth control, compared to 89 percent of White women.

Meanwhile, some of the most reliable methods, such as IUDs, are also the most expensive. An IUD can set a woman back up to $1,000. Or as Justice Ginsberg notes, a monthly paycheck.
It is no surprise then that half of all pregnancies in the United States are still unplanned (The Guttmacher Institute, 2015)xiii.

The ACA’s birth control benefit was designed to ameliorate this by making contraception free. And it has worked brilliantly. As of September, 2014, 67 percent of women with private insurance received birth control with no out-of-pocket cost, thanks to the ACA.xiv For medication that can run up to $600 a year depending on the brand, the ACA has meant the difference between being able to afford reliable contraception and not.

Despite the overwhelming popularity and near universal usage of birth control by American women, opponents like the plaintiffs in Hobby Lobby have attacked the ACA birth control benefit in over 100 federal lawsuits. The U.S. Department of Health and Human Services responded by backtracking on the ACA’s mandate though a series of exemptions and accommodations fashioned to appease the attacks.

Religious employers (defined according to the Internal Revenue Code), such as churches and other similar houses of worship, are completely exempt. Religiously-affiliated nonprofits, such as nonprofit hospitals, on the other hand, can qualify for an accommodation. The accommodation allows an entity to object, while still promising that an insured woman can access contraception at no cost to her or her employerxv. Note that as of February, 2015, there is no data available on whether or not the accommodation is actually working and guaranteeing women access to coverage.

Consequently, the birth control benefit is so complicated that it is delineated with an asterisk on the Health Resources and Services Administration’s website xvi. It is the only form of preventive care in the category singled out.

Hobby Lobby: bosses get to decide

Hobby Lobby arose because as a for-profit business, the craft store did not qualify for an exemption or accommodation. Instead, Hobby Lobby petitioned the Supreme Court for an opt-out and Justice Alito gave them one.

The Court held that the business owners can hold religious beliefs under the RFRA, the ACA’s birth control benefit substantially burdened those religious beliefs, and requiring that nearly all plans cover birth control was not the least restrictive means the government can use to provide contraceptive coverage. In short, Hobby Lobby and others similarly situated can be excused from the national requirement to include birth control in their insurance plans.xvii

Across 49 pages, Justice Alito opined about the rights of business owners. But numerous commentators have noted the glaring absence of women from his discussion. Justice Alito discussed women’s needs so superficially that it is nearly possible to read the decision and forget the controversy at issue is birth control. An issue that, by virtue of women’s reproductive capabilities, disproportionately impacts them.

Meanwhile, Justice Alito’s attempt to constrict criticism of the Court’s ruling by contrasting birth control with other essential medical interventions is equally troubling. According to the Court, Hobby Lobby does not create a blanket objection to any insurance mandate simply by asserting religious beliefs. Instead, the ability to opt-out of the law requires careful analysis. Where the mandate concerns medical treatment other than birth control, the outcome may be very different. Immunizations, for example, are explicitly distinguished from birth control and would not receive the same treatment. Immunizations, says the Court, are “supported by different interests.”xviii

For the five male justices who formed the majority bloc, birth control is not a settled medical practice, nestled within good government policy, that has led to significant advances in women’s and children’s health. Birth control is a type of health care supported by different interests, and can be compromised.

Departing from the past

Justice Alito’s glaring omission of women is poignant considering that this year marks 50 years since the Supreme Court encountered the issue of birth control in Griswold v. Connecticut.xix In Griswold, the Court struck down a state law that made contraception illegal, holding that the law interfered with the right to privacy for married persons guaranteed under the Constitution. Griswold eventually gave rise to Eisenstadt v. Baird, which extended the same rights to unmarried persons. A year later, the Court heard Roe v. Wade, guaranteeing the right of women to choose an abortion.

These cases squarely presented the ability of people to make decisions about the most private aspects of their lives—their reproductive futures. Griswold and Eisenstadt are landmark not only in their holdings, but in establishing what has since been the foundational principle of liberty:
“If the right of privacy means anything, it is the right of the individual, married or single, to be free from unwarranted governmental intrusion into matters so fundamentally affecting a person as the decision whether to bear or beget a child.” xx

The Court in Hobby Lobby faced similar issues, albeit by different actors. In 2014, it was the employer substituting its judgment, rather than the state, for women.

By ruling in Hobby Lobby’s favor, the Court placed the rights of bosses over their employees in a way that distinctly marginalizes women’s health. The Court—save for Justice Ginsberg’s dissent—ignored the health care needs of women and the mountain of evidence supporting the ways contraception improves the lives of women, their children and their families.

The implications of the Court’s thinking extend far beyond an arts and craft store and have the potential to touch the lives of American women everywhere, particularly those who are low-income and minority. The Court articulated two principles in Hobby Lobby, neither of which bode well for women. First, employers can very clearly and within the confines of the law trump the health and well-being of their employees. While the Court limited its decision to contraception, it is difficult to see what would prevent an employer from objecting to medical coverage of other conditions, such as HIV/AIDS or mental health care.

Second, the Court has deemed contraception to be separate and apart from other forms of health care. Unlike the case of immunizations, insurance coverage for birth control can be compromised. This wantonly ignores the needs of the overwhelming majority of American women who use birth control to both plan their families and manage their health. And it does particular disservice to low-income women and women of color, including Asian American women. These groups most face a multitude of roadblocks to accessing contraception and experience the gross inequities that result from lack of access.

With Hobby Lobby, the fault lines of women’s health have been squeezed to the point of debating contraception and the Supreme Court has answered in the negative.

Amina Abbas is a lawyer and director at the VENG Group, a Washington, D.C.-based policy, government relations, and communications firm. She advises clients on health care matters impacting women and racial and ethnic minorities. The views expressed here are her own.