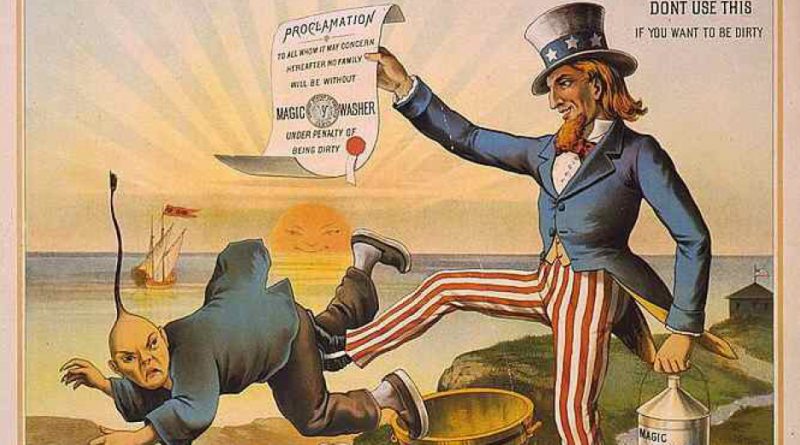 From the Chinese Exclusion Act of 1882 to the policies that welcomed hundreds of thousands of Vietnamese refugees to this country from the 1960s onward, federal immigration policy has had a tremendous influence on the migration history of Asian Americans and Pacific Islanders (AAPIs). The most recent plan for immigration reform, the Reforming American Immigration for Strong Employment (RAISE) Act, may soon impart its own influence on AAPI history.

Last week, Senators Tom Cotton (R-Ark.) and David Perdue (R-Ga.) introduced the RAISE Act to reduce levels of legal immigration to the United States by 41% in its first year and 50% over the course of ten years, from 1.05 million immigrants to just over 500,000 immigrants per year. They plan to do so mainly by eliminating certain family-based immigration preferences for parents, siblings, and married adult children. The Republican senators also plan to cap refugees at 50,000 and eliminate the diversity visa lottery.

This legislation will have a disproportionate impact on AAPIs. In a report on AAPI immigration patterns, the Center for American Progress found that 55 percent of green cards issued to Asian immigrants in 2012 were through family-based immigration preferences, while 19 percent of those green cards were given to Asian refugees and asylees. And as Asian Americans Advancing Justice reports, 67 percent of AAPIs are immigrants, while 92 percent of AAPIs are either immigrants or the children of immigrants. The immigrant experience is inextricably linked to the Asian American experience.

Because the categories Senators Cotton and Perdue plan to cut don’t line up neatly with existing visa categories, it is difficult to know exactly how many AAPIs would be affected by the RAISE Act using publically available data. On aggregate, however, we know that the majority of visas the RAISE Act would cut fall under two visa categories: (1) the “family-sponsored” visa category and (2) the “immediate relatives of U.S. citizens” visa category.

Table 1. Countries that received the most visas under the “family-sponsored” visa category in 2015

Table 2. Countries that received the most visas under the “immediate relatives of U.S. citizens” visa category in 2015

It would also be remiss to discuss legal immigration without mentioning visa backlogs. Because the Immigration and Nationality Act does not allow any country to account for more than 7 percent of the annual visas issued, people living in certain countries have to enter waiting lists for visas–some of which extend more than 23 years.  In 2014, the Center for American Progress reported:

Overall, Asian countries account for 42 percent of the estimated 4.2 million individuals waiting abroad due to backlogs in issuing of family visas, and Asian countries constitute four of the top five countries of origin in the backlog–the Philippines, India, Vietnam, and China–with backlogs ranging from about 225,000 to 400,000 for each country.

Data from 2016 suggests that this trend has not changed in the last two years.

Table 3. Countries with the longest waiting lists for family visas in 2016

Just as important as the impacts the RAISE Act will have on Asian immigration, though, are the impacts it will have on public sentiment around AAPIs. In a New York Times op-ed published last December, Senator Cotton argued that reducing immigration would reduce the alleged downward pressure low-skilled immigrants have on the wages of working Americans. This argument, however, rests on a series of assumptions that are debatable at best and can serve to fuel anti-immigrant and anti-AAPI violence at worst.

First, it assumes that the immigrants arriving on family-based visas are low-skilled. In their joint one-pager, Senators Cotton and Perdue write, “When only 1 out of every 15 immigrants arrives in the United States on a skills-based visa, the majority of the remaining immigrants are either low-skilled or unskilled.” Any AAPI can identify the spurious dichotomy they introduce here by pointing to doctors, engineers, and other high-skilled workers who arrive on family-based green cards. Second, it assumes that immigration is correlated with decreased wages of working-class Americans. The empirical data on this claim is mixed, and economists have not reached a consensus on the issue–often debating amongst themselves on the appropriate methodology to measure the real impact of immigration on wages (see: Borjas, 2016; Ottavio and Peri, 2011; and Card, 2005, among others). Third, it assumes both that Americans would take up the low-skilled jobs that would be left behind and that employers would raise wages for American workers as a result of reduced immigrants. An Urban Institute study found that immigrants who lack high school diplomas and native-born workers who lack high school diplomas actually pursue very different jobs; as such, their jobs may be more complementary than competitive. And finally, it assumes immigrants only carve the economic pie and do nothing to expand the pie, when in fact immigrants or their children have contributed to 7 of the largest tech firms in the country and own one out of every six businesses, employing 4.7 million Americans and generating $776 billion in 2012.

When I look at the RAISE Act, I see remnants of the Chinese Exclusion Act of 1882. The argument made by Senators Cotton and Perdue is not new. NPR’s Lakshmi Gandhi found that the same argument was made against Chinese railroad laborers in the mid-1800s: that “foreign laborers were depressing wages and unfairly taking jobs,” paving the way for a piece of legislation for which the U.S. House of Representatives unanimously apologized in 2012.

But the smoking gun tying the RAISE Act with the Chinese Exclusion Act is not the economic argument against immigration: rather, it is the common thread of discrimination against a specific country. While it is true that Asian countries rank heavily among the countries that will be most impacted by a decrease in “family-sponsored” and “immediate relatives” visas, a closer look at the aforementioned tables reveals one country at the top of each list: Mexico.  Without explicitly creating anti-Mexican legislation, the RAISE Act would, in practice if not in name, preclude the legal means by which hundreds of thousands of immigrants specifically from Mexico come to the United States.

While unclear whether Senator Cotton and Perdue’s blanket anti-immigration policy may be masking more discriminatory intentions against Mexico, one thing is certain: the effect will be particularly felt against Mexicans, AAPIs, and their loved ones. But for its affront to American values and the dubious economic logic that underpins it, the RAISE Act should raise concerns for all Americans.