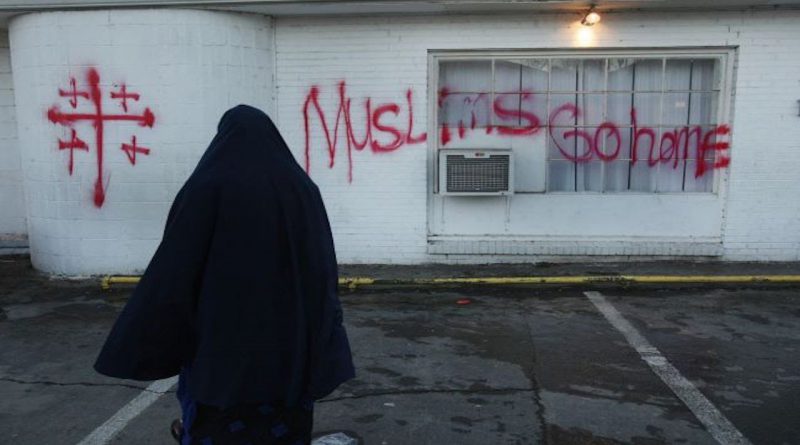 Act I: When Hate Came

Click, clack, click. I placed the finishing last edits on a PowerPoint for the civic engagement workshop that Jackie couldn’t facilitate. Reaching toward the ceiling, I stretched my sore muscles and inhaled the robust coffee aroma wafting in the air. Iced coffee rushed on to my tongue as I took a long swig and exhaled. I needed to wake up before presenting to a group of Muslin youth. Teens can smell weakness. At this rate, they’d eat me alive if I didn’t wake up.

Stepping into the building woke me more than the coffee I had at Starbucks.  Was . . . I in the right place? These kids can’t be older than ten. Five heads turned to stare at me. A warm hand clasped my frozen one.

Hello! My name is Rani. Are you the workshop presenter? I’m sorry the turnout is a little low today, but we are very excited about your workshop!

How old is everyone? I asked.

Ah, I see. I was curious. I smiled at Rani. So, not old enough to vote. Great.  There goes the last half of the PowerPoint. Still, I could present on basic concepts. I’d just have to wing it. Anxiety crept up my stomach, as I set up the projector. Their big, glossy eyes watched my every move in genuine curiosity.

So why do we need to vote? I asked with syrupy excitement, hoping these kids would feed off this sugary fakeness.

Because we need a president. If we don’t vote, then we won’t have a president. A little eight-year-old boy said promptly. The fervent, matter-of-fact tone in his voice made my soul weep. I can’t do this, I mourned. They are too young for this.

Because we would want people that we like in the government, right? A voice piped up from the back. A hand pushed up the thick-framed glasses on the twelve-year old girl’s face, which was lined with curly, bushy hair.

That’s a great answer, Natasha! Rani beamed. My breath caught. Okay, okay, okay. I can work with this. I smiled at them. Natasha and her friend in the back were much more focused in the conversation about how voting is important. The leading questions Rani posed and offered up kept the conversation light and gentle. Everyone was engaged, except for the little eight-year boy who sat cross-legged on the floor, face in fisted hands, distracted, but paying just enough attention to chime in tangents.

The PowerPoint slide flipped to the video, “Hate Comes to Orange County.” Cold fingers scraped the pit of my stomach. I forgot about this slide. It showed the ugly head of racism personified with venom spewing from angry pink-faced faces in the neighboring city, Yorba Linda. I couldn’t watch it in one sitting in my office and there it was, in front of twelve-year-old-and-under Muslim kids, who were wriggling from excitement of the conversation we just had.

And this . . . is a video that shows an event where some of our elected politicians spoke at. I hit play with the rocks at the bottom of my heart.

I watched their faces somber up as cries of “Go back home! USA! USA! We don’t want you here. Stupid terrorists, go home, go home, go home! One nation under God, not Allah! Never forget 9/11!” besieged their ears. I couldn’t take seeing innocence getting shredded from their eyes, so I hastily skipped to the part where Congressman Ed Royce was dribbling some political noise to set up my next discussion question.

So . . . do you think these politicians would do what’s best for you? I cautiously tiptoed.

The little eight-year-old looked up to me and, with all the determination that was possible to collect in eight short years on earth, said,

No. I don’t think he knows what’s best for us at all.

Natasha, growing feisty, scoffed at how he claimed to represent people he didn’t think mattered. She and her friend dominated the conversation, talking faster and faster, tripping over words and thoughts that appeared to have been marinating for quite some time. Rani and I couldn’t help but be energized at the kids’ passion. Natasha was radiating.

As I wrapped up presentation and passed out stickers, the little boy told me he was going to tell all the adults he knows to vote because he didn’t like Ed Royce.

I left the building, with an odd sense of swelling sadness. They were not old enough to vote, but they understood why it was so important. They were reminded everyday, even at twelve, even at eight. I wasn’t sleepy anymore, but I was so very tired.

Act II: When Hate Grew
I went to work one morning,
driving people through the blood veins of LA,
cross crossing cities,
cross crossing lives.
I picked up a group of four
as my first fare.
Bags under their eyes,
the smell of musty adventure on their rumpled clothes,
they desired more decadent indulgences.
I took them to where they could bathe their sins
in bottomless mimosas.
They drove around in lazy circles in their conversation,
speckled with, “yesss”es and “ohmygod”s,
a road that went nowhere.
The bleary-eyed backseat passenger
stuck his head out the window
as we neared toward the Grove.
Shaking out his greasy locks, he called out,
Look at all these Middle Easterns!
This place is going to blow up!
The quick chastise from his friend
didn’t loosen my white knuckles clenched at the wheel.
Bombs, he sang, in their turbans!
His friend snapped, Stop, that’s racist.
But still he dribbled filth from his mouth
and out my window.
Boom! An explosion erupted
LEAVE, I roared.

Finally, I dropped them off
in relief
and in guilt.
Because
I had let them
go.
And
I had let
them go.
We both traveled on roads that went nowhere.

Slow pan across a coffee cup and today’s headline in a newspaper:

“AMERICANS ARE STILL ATTACKING SIKHS BECAUSE THEY THINK THEY’RE MUSLIMS”

uyên phương hoàng is from the City of Garden Grove in Orange County, California. She is working on her MA in Asian American studies and MPH in community health sciences at UCLA, where she also studied as an undergraduate. She is a poet, a proud dog owner, and an organizer.