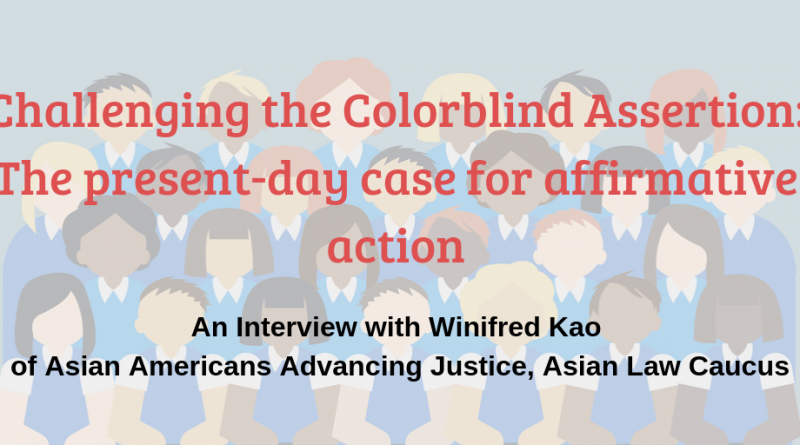 AAPR Editor Sydney Fang interviewed Winifred Kao, the Litigation Director of Asian Americans Advancing Justice–Asian Law Caucus, regarding the Students for Fair Admissions v. Harvard University lawsuit. Kao discusses the key racial justice issues, including what might explain the divide among Asian Americans, and where we need to go from here. The Editorial Board of AAPR released a statement in support of affirmative action policies in 2018.

AAPR: Can you introduce yourself and your organization?

Kao: I’m the litigation director at Asian Americans Advancing Justice–Asian Law Caucus. We are a civil rights legal organization based in San Francisco, CA. We are part of a national affiliation of progressive Asian American organizations. One of our affiliation’s consistent platform positions has been support for affirmative action in education and other sectors of public life. Our affiliation is also part of the legal team for a multi-racial group of students, including Asian Americans students, who testified in the Harvard case in support of affirmative action.

AAPR: What was the case about? Who were the plaintiffs?

Kao: This case was brought by a group of Asian American students who were rejected by Harvard and organized and led by Edward Blum. Blum is a conservative activist. He has been no friend of civil rights. He helped organize and fund the Fishercases, which challenged the use of race as a factor in holistic admissions at the University of Texas. He was also behind the Shelbycase, which successfully dismantled a key provision of the federal Voting Rights Act.

The Harvard case is like prior cases that have challenged affirmative action in admissions, but this time, Blum used Asian Americans plaintiffs instead of white plaintiffs, claiming that recognizing race as a factor in admissions hurts Asian Americans. It’s not the first time in civil rights history that we’ve been pitted against other minority groups. We need to reject that framing and recognize what’s really at stake.

Kao: I think there is a lot of confusion about holistic admissions in Asian American communities.  Holistic admissions is notabout racial quotas or ceilings or caps. It’s not about assigning negative points to Asians for being Asian. All of that would be illegal.

Holistic admissions is a process of looking at an applicant as a whole person. It recognizes that we are more than just a test score or GPA. It recognizes that, frankly, the more interesting part of who we are and what we bring to the table are our passions, pursuits, our other accomplishments and talents (be they musical, athletic, creative, entrepreneurial), and our life experiences and perspectives. It recognizes that our life experiences and perspectives are necessarily shaped and informed by our background, our gender, our socio-economic class, and our race. You can’t divorce those characteristics from our identity or personality– nor should we want to. It’s part of the richness of who we are that we should embrace and celebrate. Holistic admissions allows schools to take all of those different factors, including race, into account.

Kao: Blum and others who have attacked affirmative action were smart about it. They said they are for racial equality, that we should be “colorblind” and not look or talk about race at all. Instead, they say we should just use supposedly “race-neutral” measures like test scores and grades to make admissions decisions.

Part of the problem is that in response, proponents of affirmative action sometimes don’t answer that colorblind assertion. We talk about diversity, which is obviously important, but it’s not just diversity for the sake of diversity.  It’s also about equality and equal access. We need to address the color-blind argument head on and defend the fundamental equality of black, Latino, and other minority students and their right to access our college campuses.

To do that, we need to remind folks that the reality is we don’t live in a color-blind society. All of us can see that. Even if we nominally remove race as a factor in admissions, we’re not left with a race-neutral application process. Like it or not, race affects our educational opportunities from the day we step in the schoolhouse door. That reality doesn’t disappear or become irrelevant when we sit down to fill out a college application.

Take GPAs. Our K-12 schools are more segregated and unequal today than they were 40 years ago. The majority of black, Latino and other minority students go to schools that are majority-minority. Those schools have fewer resources than majority white schools – in terms of AP courses, teacher turnover, extracurriculars, sports, college counselors, and test prep opportunities. There are also dynamics with both explicit and implicit racial bias in academic tracking, discipline, and mentorship.  GPAs capture and magnify a lot of those racial inequities and biases. A 3.6 GPA from a minority student who goes to an all minority school with fewer AP courses and resources and support, just represents a different kind of achievement and will to learn than, say, a 3.6 from a student who goes to a white majority, suburban school, who doesn’t have to deal with the same kinds of challenges and hurdles.

Test scores are not race-neutral either. I know test scores have a special place many Asian parents’ psyches because high-stakes testing is something used in Asian countries, but the history of the tests in the United States is that they were originally developed and used to exclude minority students from Ivy League schools. That bias is hard to root out because the test is “normed” and questions are selected so that those who did well on the test before do well on the test again — so that there is a consistent “standard” or measurement from year to year.  That norming process builds in bias from year to year. Professor Claude Steele and others have also done studies about how racial stereotypes about intelligence or academic capacity negatively warps the high-stakes test taking experience for minority students. It’s not a race-neutral experience for a lot of minority students who take those tests.

Maybe more importantly, I don’t think anyone actually thinks that a 3-hour test that you take on a single day in your life accurately captures who you are, what you have to contribute in the classroom, or what kind of leader, teacher, entrepreneur, lawyer, or doctor you might want to be. The value of the SAT in predicting future academic success is very low.

If schools are going to use test scores and GPAs in admissions, they can’t fairly evaluate or compare cold test scores or GPAs in isolation. They haveto look at the context behind the numbers, including the impact of racism and segregation on those numbers, in order to understand what those numbers actually mean and measure. In fact, notlooking at that context is an unfair bias againstblack and other minority students.

AAPR: If affirmative action was no longer allowed,, what would it mean and how would this impact diversity and Asian Americans?

Kao: If the plaintiffs had successfully struck down race-conscious holistic admissions at Harvard, affirmative action at other colleges and universities across the country would have fallen–a devastating step backwards for everyone.

I think we sometimes forget – and perhaps some segments of our Asian immigrant communities don’t know the history – but the fight for affirmative action was, and fundamentally still is, about the fight for the promise of equal and integrated education, as set out in Brown v. Board of Education. Affirmative action has been, and continues to be, the only effective desegregation program for higher education.

Just to take a step back — after Brownwas decided in 1954, there was widespread resistance to desegregation. That resistance wasn’t just limited to the South or to K-12.  It happened in the North, and it extended to public colleges and universities. One example is the University of Michigan, where I went to law school. I was there when Barbara Grutter famously sued the school for its use of race in admissions, and. I was part of a group of multi-racial students who successfully intervened in that case to defend affirmative action.

During the case, I was struck to learn that between the years of 1960 and 1969, the University of Michigan Law School graduated over 2,000 students. Of those 2,000+ students, only ninewere black. None were Native American, Latino, or Asian American, and very, very few of them were women. Remember this is a publicinstitution, paid for by allof the people of Michigan. It wasn’t until student actions during the Civil Rights Movement pushed the University to adopt affirmative action programs in the 1970s that the school was opened up for the first time, in a meaningful way, to black and other minority students, including Asian Americans – or women. The first Asian American students didn’t graduate from U of M Law School until afterit adopted an affirmative action admissions program. The same is true in public universities across the country.

Affirmative action also opened up doors for our community in employment and public contracting. It was one of our only ways to break into “old boy” networks, where then, and now, jobs still often go to people and companies “in the know,” or who know the right people.  Affirmative action gives other qualified folks a chance. A lot of Asian American communities can see the importance of these programs in employment, public contracting, and other contexts.

We need to do a better job of educating our communities about what these programs mean for higher education. Here in California, because of Proposition 209, public universities have been barred from using race in admissions. Since then, without affirmative action, we have seen the re-segregationof public higher education in this state. Post-209, the flagship public universities, with the most resources and opportunities have become predominantly white with only certain Asian groups. Many black, Latino, Native American, and other underrepresented Asian American sub-groups have been pushed to lower-tier schools with fewer resources and opportunities, or out of the public education system entirely. Tellingly, we have also seen attacks on the minority students who are left on those flagship campuses, including anti-Asian racism, attacks on ethnic studies and women’s studies, and generally a rise in bigotry of all kinds. Is that really the direction we want to go, as a society?

AAPR: You laid out the stakes of this case and the importance of current holistic admissions, which ,unfortunately, is insufficient to remedy more systemic exclusion and racism. Where do you think the conversation on education and equitable access should be? What is the role of people of color and specifically Asian Americans?

Kao: I think we’ve allowed the narrow Supreme Court doctrine to limit our public discourse about affirmative action too much. It should be the other way around. We need to push the law to recognize the reality we live in. Beyond just diversity, we should be talking about current, present-day racial inequalities and segregation in education and how we need to take affirmative measures to account for and address those issues. Colorblindness is not the reality, and trying to ignore that race exists is not a solution. Ignoring race actually isn’t even a choice for those of us who aren’t white, is it? Asian Americans need to organize and educate our own community members around these questions and the broader issues at stake. If we don’t do that, other conservative interests clearly will.