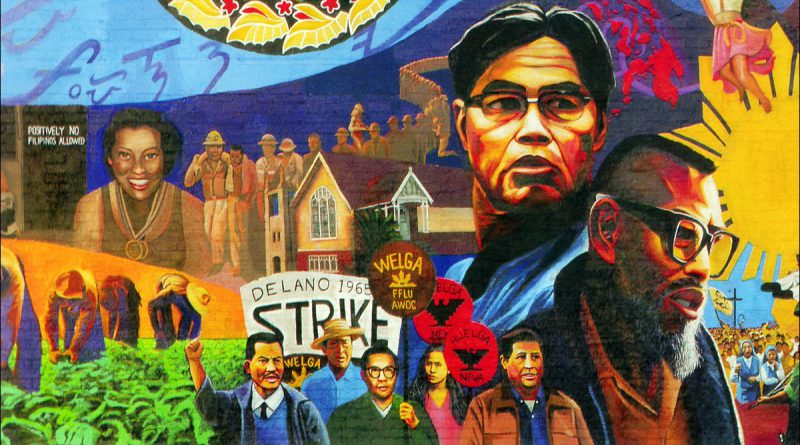 This piece was published in the 29th print volume of the Asian American Policy Review.

“Although we shared many of the community’s challenges, we have also noted that grassroots and community based community-based organizations have been spearheading immense efforts to create more gender-inclusive education and communities, both within the state and internationally.”

On September 29th, 2018, the UC Davis Bulosan Center for Filipino Studies organized its first annual Filipino Community Policy Symposium. With Filipinos being the largest Asian ethnic group in California, the event gathered over 100 policy experts, advocates, and grassroots organizations largely from the Bay Area, Sacramento, Los Angeles, and San Diego to discuss issues directly affecting the Pilipinx community, including women and LGBTQQIA+ issues. As a result of the Symposium’s discussions, the following brief discusses major trends affecting the LGBTQQIA+, gender non-conforming, and Filipina community across California, with a particular emphasis on those who identify as gender non-conforming and transgender. We focus on three major sections: stigmatization and lack of education, discrimination in the workplace and public spaces, and human rights. After each section, the Bulosan Center for Filipino Studies and Sacramento Filipinx LGBTQQIA+, will provide recommendations for legislation and community-based solutions to advance a vision of inclusion and gender justice.

Major Trends in the LGBTQQIA+ Pilipinx Community and Recommendations for Change:

Stigmatization and Lack of Education

Many Filipinas and LGBTQQIA+ community members are impacted by poor self-esteem, mental health issues, and exclusion from the larger Pilipinx community. According to a study in 2015, Filipino-American adolescent girls have the highest rates of suicidal ideation amongst Asian American females. Additionally, Filipino Americans seek mental health services at the lowest rate of any other Asian American group.[1] [2] These rates are heightened among LGBTQQIA+ Pilipinxs due to poor media representation, stigma, and lack of education around gender, sexuality, and mental health in the Pilipinx community. Many of these stigmas come from cultural norms based in Filipino and Filipino-American culture such as shame, filial piety, and the gender binary–the belief that there are only two genders, male and female. LGBTQQIA+ people are, for example, often seen as comedic relief in Filipino media, or as “unnatural” due to conservative religious attitudes (about 80% of the Philippine population is Catholic).[3] In an interview with Ging Cristobal, a lesbian Filipina and project coordinator of Outright Asian International, she states “Society thinks that you need a man’s kiss … for you to be ‘normal’ or heterosexual … And they use religion because they don’t want you to burn in hell. So, the intention is supposed to be good, because they want to ‘save’ you. But in fact, it’s wrong.”[4]  Within the Symposium’s discussions, participants noted that there is a hyper sexualization of trans women in the media. If a trans Filipina actress is able to “pass,” or in other words, their gender expression fits mainstream representations of what a woman looks like, she is widely found in modeling or beauty pageants. If a trans woman does not fit mainstream norms of what a man or woman looks like, she is seen as a jester or a clown. These norms are discriminatory, leaving trans and gender non-binary community members particularly isolated from their ethnic communities.

To address these stigmas, LGBTQQIA+ organizations have developed trainings, curricula, and community programs to address these harmful stereotypes. For instance, Sacramento Filipinx LGBTQIA, a grassroots organization of queer, trans, and gender non-conforming Pilipinx community members, has organized several community events that provide insight into the Pilipinx LGBTQIA perspective. One of these events include “Interconnections,” a symposium that addresses the individual and collective experiences of the local queer and trans Pilipinx community. The Symposium consisted of three workshops: the “past” which broadly explored the cultures and histories of the Filipino people; the “present” which examines how the past informs the emotions and behaviors of the present; and lastly, how the community can guide this journey into a balanced and healthy “future.” Over fifty participants attended Interconnections, and sparked further events such as roundtable discussions on Introduction to Filipinx Queer and Trans identities where community members share their narratives. This encouraged the local and regional Pilipinx community to engage in conversation, learn about LGBTQQIA+ responsiveness, and the issues that Queer and Trans Pilipinx community may face. Sacramento Filipinx LGBTQ continues to host programming to further inform the Pilipinx community and larger public around gender justice and inclusivity of trans and non-binary people.

Their efforts are one of the many contributions to the statewide movement in changing culture and education around gender and sexuality. California organizations such as API Equality Northern California have led the Trans Justice Initiative, which creates intersectional curriculums that center trans and gender non-conforming voices. In September of 2018, former

Governor Brown passed AB 504, which requires the Commission on Peace Officer Standards and Training (CPOST) to develop LGBTQ-specific training for peace officers and dispatchers. Although grassroots organizations have been making strides, there is a still need for policy and educational changes to further train communities towards inclusivity.

To address stigmatization and lack of education:

Discrimination in the Workplace and Public Spaces

Due to the stigmatization that LGBTQQIA+ Pilipinx and Filipina community members experience, Symposium participants shared that they are more vulnerable to participating in survival sex trade, human trafficking, and sexual assault. They also more commonly experience challenges in accessing health care and employment with sufficient benefits and wages. Among the transgender community, a 2015 study shows that the unemployment rate among trans people of color (20%) was four times higher than the US unemployment rate (5%) (James, Herman, Rankin, Keisling, Mottet, and Anafi, 2016).[5]

In relation, according to a 2015 study of the Asian American, Native Hawaiian, and Pacific Islander (AANHPI) transgender community, 10% of respondents were unemployed, twice the rate of the U.S. population (5%) (James and Magpantay, 2016).[6] Due to mistreatment and discrimination within public spaces and the workplace, such as anti-trans “bathroom bills” and job termination, trans people experience a higher risk of poverty and engagement in criminalized work. Nearly one-third (32%) of AANHPI respondents were living in poverty, a rate three times higher than the poverty rate of the U.S. population. Sixteen percent (16%) of AANHPI respondents participated in the underground economy, including sex work and drug sales, in order to obtain income, food, and other necessities (James and Magpantay, 2016).[7] Additionally, more than a third of AANHPI respondents experienced at least one type of mistreatment in a place of public accommodations where staff knew they were transgender. Although the study provides some insight into the transgender Pilipinx community, there is a strong need for consistently updated and disaggregated data that includes personal narratives that further humanizes community members’ experiences.

Fortunately, organizations across the country have addressed these issues of discrimination and economic oppression in various ways. The National Center for Transgender Equality and the National Queer Asian Pacific Islander Alliance have implemented nationwide surveys that identify disparities amongst AANHPI groups. Within California, the Transgender Law Center has partnered with the San Francisco LGBT Center to form the Transgender Economic Empowerment Initiative, which protects community members from job discrimination while providing employment opportunities and trainings for job seekers. Symposium members have also noted that domestic violence organizations, such as My Sister’s House have developed service networks to support those who have experienced the survival sex trade, assault, and human trafficking, and housing rights organizations have begun to focus on pushing for inclusive shelters for LGBTQQIA+ homeless youth. Grassroots groups and community-based organizations are, thus, at the forefront of addressing issues of discrimination.

To address discrimination in the workplace and public spaces:

These issues of discrimination connect to transnational human rights abuses, such as the murder of Jennifer Laude. In 2014, Jennifer Laude, a trans Filipina, was murdered by Joseph Pemberton, a US Marine, in Olongapo City, Philippines. Jennifer’s death sparked outrage around the world, shedding light on human rights abuses in the Philippines and the mass murders of trans women of color. Since 2013, there have been at least 128 transgender and gender-expansive individuals killed in the United States, and in 2018 alone, about 80% of those who have been killed were trans women of color (Human Rights Campaign, 2018).[8]

Looking transnationally, the Philippines has experienced mass human rights abuses due to the historic militarization of the Asia Pacific region and interventionist US foreign policy, such as the Visiting Forces Agreement (VFA). These violations include impunity towards US officers committing sexual abuse on military bases on Philippine soil. Jennifer Laude’s death is an example of such impunity with Pemberton’s use of the Gay/Trans Panic Defense, a legal defense strategy stating that a victim’s sexual orientation or gender identity is to blame for a defendant’s violent reaction, including murder (Stern, 2015).[9] The Gay/Trans Panic Defense has been criticized as prejudiced towards LGBTQQIA+ peoples, and it was used as a method to free Pemberton of charges for murder. Pemberton was ultimately charged with homicide, not for murder, and his maximum sentence was ten years.

As a result of her death, GABRIELA, an international grassroots-based alliance dedicated to the “liberation of all oppressed Filipino women,” spearheaded the Justice for Jennifer Laude campaign. The campaign’s demands included convicting Pemberton on Philippine law, increasing protections towards LGBTQQIA+ peoples, and abolishing the Visiting Forces Agreement, which grants US officers immunity for prosecution if they commit crimes against Filipinos. In 2015, Bahaghari, a group of LGBTQQIA+ and womens’ organizations, gathered hundreds of participants in Makati City in order to push for Pemberton’s conviction, to end the VFA, and extend protections against discrimination.[10] In conjunction with protests across the Philippines, GABRIELA chapters outside of the Philippines, such as GABRIELA Hong Kong and GABRIELA USA, brought together Filipinas and allied communities to host discussions and rallies under the Justice for Jennifer Laude banner — many of which our Symposium members have led and participated in. The campaign ultimately developed an international movement towards LGBTQQIA+ justice as well as an end towards state-sanctioned violence in the United States, the Philippines, and around the world.

From the Symposium’s discussions, we identified three major areas where the Filipina and LGBTQQIA+ Pilipinx community are affected politically, socially, and economically across California. Although we shared many of the community’s challenges, we have also noted that grassroots and community-based organizations have been spearheading immense efforts to create more gender-inclusive education and communities, both within the state and internationally. Currently, there have been strides in the passage of policies that will protect and serve LGBTQQIA+ people. These policies include SB 918, which will enhance support services for homeless youth, and AB 2504, which provides LGBTQ cultural competency trainings for law enforcement officers. There is still a long road to go in order to fully transform our communities towards political, economic, and cultural inclusion. Through policy change, social movements, and grassroots efforts, the vision towards gender justice will come to fruition.

Katherine Nasol (she/they) is a community organizer and PhD student in the UC Davis Cultural Studies Graduate Group. For the past nine years, she has led international and regional campaigns on housing, gender justice, and immigrant rights.

Nikki Abeleda (she/they) is a Filipinx queer womxn, and is the founder of Sacramento Pilipinx LGBTQIA. She earned a BA in social work from CSU Sacramento and served as the Community Media Director for the A/PI Queer Sacramento Coalition (APIQSC). She is pursuing a Masters of Social Work degree with a concentration in Mental Health at Boston College and currently organizes with Boston Pilipino, Education, Advocacy, and Resources (PEAR).

[4] Chang Cosal, “In the Philippines, being a lesbian means being invisible” in CNN Philippines (Manila, 2018).

[9] Mark Joseph Stern, “Marine Who Allegedly Killed Trans Woman Claims He Was Defending His Honor” in Slate (The Slate Group, 2015).