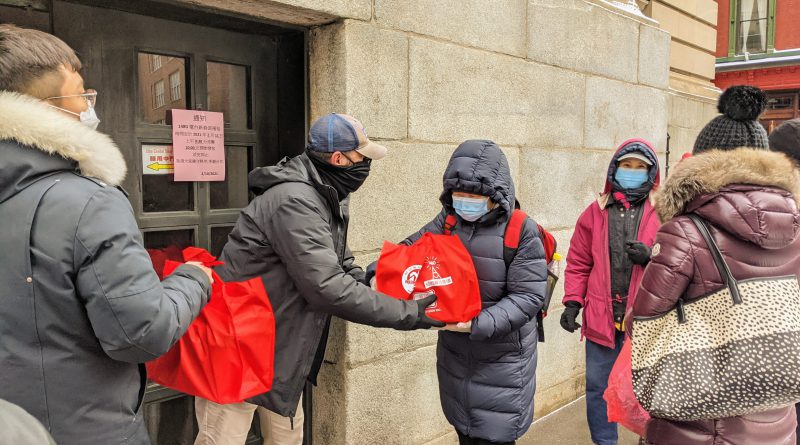 Because of the pandemic, CPC has reaffirmed its belief that community-based organizations remain critical to advancing the rights and well-being of low-income and immigrant communities. The strength and resiliency of the Asian American community is tied to the capacity and sustainability of Asian American organizations.

On 13 March 2020, Mayor Bill de Blasio issued a state of emergency for the City of New York, removing any legal and regulatory barriers related to response efforts for COVID-19. The mayor said, “This isn’t the first set of restrictions we’ve handed down and it will not be the last. As we learn more about COVID-19 and how it spreads, we’ll continue taking steps to keep New Yorkers safe.”[1] Two days later, with 269 cases and six deaths, Mayor de Blasio announced on 15 March that all schools would close due to COVID-19 and that all students would move to remote learning.[2] The mayor also announced that restaurants, cafes, and bars are limited to take-out and delivery and that entertainment venues like movie theaters, nightclubs, and concert venues must all close.[3] On 20 July, New York City was the last region of the state to enter Phase 4, though restrictions remained in place on group gatherings.[4] New York City public schools closed for the rest of the 2019-20 academic year and did not reopen for in-person instruction until 29 September 2020. By then, New York City had over 298,000 confirmed cases and over 24,200 deaths related to COVID-19.[5]

While all New Yorkers were affected by the pandemic, COVID-19 had a negative impact on the Asian American community as early as January 2020, two months before the rest of New York City. Small businesses in Manhattan’s Chinatown reported sales drops of between 40 percent and 80 percent in January according to the Chinatown Business Improvement District. In Flushing, Queens, business was down 40 percent in January according to the Flushing Chinese Business Association.[6] Xenophobia impacted not only the economic stability but also the public safety of the Asian American community. As the pandemic spread throughout the United States, President Donald Trump would continue to blame China, using terms like the “Chinese virus” and “kung flu.” Anti-Asian racism related to COVID-19 would surge in New York City, as 316 racist incidents against Asian Americans were reported to the New York Police Department (NYPD) between March and July. In response, the NYPD would form an Asian Hate Crime Task Force in August.[7]

Under these circumstances, the Chinese American Planning Council would implement its COVID-19 relief efforts.

The Chinese American Planning Council (CPC) was founded in New York City’s Chinatown in 1965 during the Civil Rights Movement, Immigration Reform, and War on Poverty. Today, CPC is the nation’s largest Asian American social services organization and has the mission to promote the social and economic empowerment of Chinese American, immigrant, and low-income communities.

As the largest non-profit provider of social services targeting Asian American communities in the United States, CPC is in a unique position to serve the many immigrant and low-income individuals and families in New York City who have been afflicted by the COVID-19 pandemic and its disastrous racial and economic consequences. CPC operates community centers, school-based programs, and affordable housing developments in five neighborhoods of New York City. CPC also has a subsidiary, the CPC Home Attendant Program, which provides home care services to homebound seniors and people living with disabilities in all 51 council districts of New York City.

Communities in the Wake of COVID-19

CPC’s social service programs serve nearly 60,000 community members of all ages and immigrants from 40 different countries speaking 25 distinct languages or dialects. Nearly all of the individuals, seniors, and families fall below 200 percent of the federal poverty line. Almost all the children qualify for free or reduced lunch. Two-thirds of community members are Asian, and the remaining one-third represents the diversity of NYC. In the neighborhoods with CPC’s three community centers (Chinatown, Manhattan; Sunset Park, Brooklyn; and Flushing, Queens), 25 percent of residents are below the federal poverty level, while 49 percent of all Asian residents in New York City live at or near the poverty level. More than 1 in 4 immigrants of working age has less than a high school education, and those with more formal education or training may still find their career options limited.

Since the pandemic has taken hold, individuals and families in CPC’s programs have reported facing food insecurity, inaccessible health care, high medical costs, mental health needs, difficulty with their children’s education, inability to assist aging family members, problems paying rent, and unemployment. For example, Elizabeth[8] is a young woman who immigrated to the US when she was in high school. She fell out of status soon after entering the US Since then, she has suffered many instances of abuse and is currently in the process of applying for immigration relief as a victim of human trafficking. Given her undocumented status, Elizabeth was working under the table, cash-based jobs but lost her job due to the pandemic. She has experienced anti-Asian harassment, such as people fake coughing around her and saying racial slurs. Elizabeth is most worried about food insecurity. Another example is Mr. and Mrs. Fu, who immigrated to the US with their two children and their grandparents. Prior to entering the US, Mrs. Fu was persecuted in China for being Hui and living in Xinjiang. Their entire family is undocumented, and Mrs. Fu is currently in the process of applying for Asylum based on Religion, Nationality, and under “Particular Social Group”. They do not qualify for any federal assistance, given their immigration status. Mr. Fu was working cash-based jobs prior to COVID-19 to support his family. Unfortunately, he lost his job due to the pandemic. The Fu Family is most worried about making rent payments.

In a survey of CPC’s families in July 2020, 70 percent reported a loss in work hours or a loss in jobs altogether. The New York State Department of Labor saw unemployment claims from Asian Americans spike 6,900 percent in April (147,000 claims), the highest of any racial or ethnic group.[9] Because Asian American neighborhoods in New York City were particularly hard hit as early as January, businesses were forced to lay off workers. About 25 percent of residents in Asian American neighborhoods work in industries like restaurants, hotels, retail, and personal care where layoffs have been most prevalent and where jobs will be slowest to recover.[10] In addition to health and economic burdens, Asian American communities have faced discrimination and harassment, though many instances go unreported.

CPC implemented immediate relief services on 16 March, when New York City schools were ordered to close, and moved any operations that were not reliant on in-person services to remote on 22 March. Community members seeking assistance in enrolling in unemployment insurance, SNAP, and other public benefits flooded the phone lines of CPC’s community centers. Community members relied on CPC because New York State’s helpline for filing unemployment claims had limited interpretation and translation available. When the shelter-in-place happened in March, government funders initially communicated regularly with human services organizations like CPC to ensure that contracts would be paid in full. As New York State and City began facing deficits of billions of dollars, CPC faced budget cuts to its summer children and youth programs and the possibility of staff furloughs and layoffs.

The challenges brought on by COVID-19 raised both strategic and tactical considerations for CPC, from pivoting to serving daily hot meals to seniors to ensuring staff members have the necessary PPE, supplies, and technology needed for vital services in-person and remotely. Many of CPC’s programs and staff members have shifted their day-to-day programming to entirely new models of operating, which is straining organizational resources in a climate of uncertainty and creating new challenges when providing services to hard-to-reach constituents, especially those with limited English proficiency and limited digital literacy.

In order to reach isolated and vulnerable community members, CPC staff have modified programming and outreach, including establishing a WeChat account and providing daily health and news updates on Chinese radio. CPC distributed cell phones, tablets, and laptops to staff members to address the influx of requests for assistance to complete unemployment insurance, housing vouchers, SNAP, Medicaid, and other benefit applications. CPC updated its online and digital platforms with the latest advisories and worked with partner organizations to share translated resources like one-pagers on renter’s rights and the Families First Coronavirus Response Act. CPC leadership have also spoken regularly with elected officials, policymakers, and foundation leaders about community members’ stories of struggle with medical bills, children with special needs, and fear of deportation. CPC processed over 1,500 requests for cash assistance to eligible community members, many of whom have not qualified for federal stimulus relief.

For example, in April, a new mother named Megan and her newborn faced a lack of resources as the pandemic hit. She was terrified to leave the house with her infant and take public transportation due to COVID-19. She tried to obtain food assistance for weeks over the phone but did not get any response from the New York State helpline. Then her husband lost his job. An immigrant, Megan lives in a mixed-status household and did not know if her family would qualify for SNAP. Megan called CPC for help enrolling in SNAP and securing an EBT card, and CPC staff contacted the city office to verify Megan’s information remotely to help her get the EBT card. CPC also gave emergency cash assistance to the family, which they used to cover rent and necessities for their infant child. In June, an undocumented couple with an infant and a 6-year-old were referred to CPC by the Mayor’s Office. The Kim Family was worried about public charge affecting their adjustment of status, so they did not want to apply for public benefits, preferring to go hungry. After speaking with CPC staff, the Kim Family applied for their US citizen infant to receive SNAP, and CPC gave them emergency cash assistance to help them cover their rent and other expenses.

Because of the pandemic, CPC has reaffirmed its belief that community-based organizations remain critical to advancing the rights and well-being of low-income and immigrant communities. The strength and resiliency of the Asian American community is tied to the capacity and sustainability of Asian American organizations. Because Asian American organizations do not receive an equitable share of public and private funding, CPC continues to advocate for Asian American communities as well as human services organizations and staff who serve them. It is working to ensure that the federal government provides another stimulus package that supports not only state and local governments but also marginalized immigrant families. Because the pandemic had disparate impacts on communities of color, CPC continues to work with partner organizations on an advocacy campaign to mandate New York State to disaggregate data on Asian American ethnic groups, which would be critical to targeting health resources. CPC is also engaging with elected officials to increase funding for human services organizations to pay for the full cost of program delivery and for human services workers to have a living wage, hazard pay, and PPE. Though 2020 has been a challenging year due to the COVID-19 pandemic, CPC’s resilient staff, diverse programs, advocacy efforts, and dedicated supporters and partners have ensured that New York City’s Asian American community will have a better opportunity at an equitable recovery.

Wayne Ho is the president and CEO of the Chinese American Planning Council. He received his bachelor of arts from UC Berkeley and his master’s in public policy from Harvard University’s Kennedy School of Government. Born in Singapore and raised in California, Wayne lives in Brooklyn with his wife and two children.

[2] “New York City to Close All School Buildings and Transition to Remote Learning,” The official website of the City of New York, 15 March 2020. https://www1.nyc.gov/office-of-the-mayor/news/151-20/new-york-city-close-all-school-buildings-transition-remote-learning.

[3] “Statement From Mayor de Blasio on Bars, Restaurants, and Entertainment Venues,” The official website of the City of New York, 15 March 2020. https://www1.nyc.gov/office-of-the-mayor/news/152-20/statement-mayor-de-blasio-bars-restaurants-entertainment-venues.

[8] Names have been changed to protect the identity of community members.