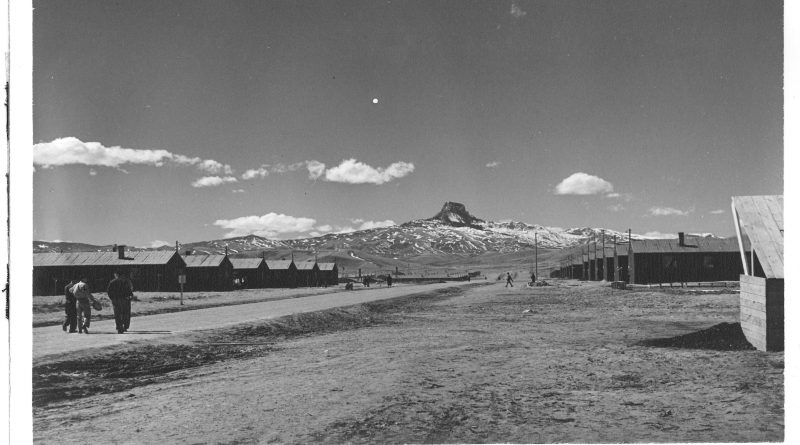 Thousands of Japanese Americans faced the same challenges as my grandfather. They faced discriminatory practices established by officials at the highest levels of our government and the lies perpetrated by these officials.

Iyekichi Higuchi prepared to leave the Heart Mountain camp for Japanese Americans in May 1945 to return to San Jose, California, look for a home for his wife and two at-home children, and to find a job.

Caption: Iyekichi Higuchi stands next to the barn at the farm in San Jose that he bought before he was incarcerated in a Japanese American concentration camp during World War II.

He had been forced to sell his 14.25-acre home in San Jose three years earlier when the federal government had forced 120,000 Japanese Americans from the West Coast because of hysteria about the alleged security threat they posed in the days following the 7 December 1941, Japanese attack on the naval base at Pearl Harbor, Hawaii.

Just hours before Higuchi was to leave Heart Mountain, he suffered a heart attack while eating in the mess hall.[i] The stress caused by the impending trip proved too much for him. The proud 59-year-old farmer could not leave.

Iyekichi Higuchi was my paternal grandfather. His personal file kept by the US War Relocation Authority details the effects his unjust incarceration had on him and his family. The weight of the hate crimes that settled on him and others of Japanese ancestry proved too much to bear.

Caption: Setsuko Saito and William Higuchi sit next to each other in the front row of their ninth-grade class photo in the high school at the Heart Mountain concentration camp. After the war, they would meet again on the campus of the University of California, Berkeley, marry and have four children, including author Shirley Ann Higuchi.

Before the war, they owned businesses or built professional careers as doctors, lawyers or scientists only to have their livelihoods destroyed by an over-hyped hysteria based on racism and cultural ignorance.

Those successful careers meant little to the Caucasian-dominated society that rejected them. Come 1945, these same victims of racism had to navigate the bigotry that awaited them at home.

What faced those returning Japanese Americans mirrors the hate crimes now facing Americans of Asian descent who are blamed for spreading the COVID-19 virus that originally started in China to the United States.

Since the pandemic took over in March, thousands of Asian Americans have been accosted in public spaces, spit on or assaulted and told to go back where they came from, even if that was not Asia at all.[ii]

President Donald Trump routinely calls COVID-19 the China virus or plague, as he continues to mismanage the pandemic that has killed at least 235,000 Americans.[iii] His words turn an unfair spotlight on millions of Americans of Asian descent.

In Sacramento, psychologist Carolee Tran was attacked by a fellow customer in Costco who told her to go back where she came from. Tran is a refugee from South Vietnam who arrived in the United States in 1975 after her country fell to the communists.

In 1945, Higuchi knew he faced similar bigotry or worse. So did the government, which knew that Japanese Americans were not welcome back in their former hometowns. War Relocation Authority records show the agency collected information on all of the acts against Japanese Americans, starting with arson and attempted murder.[v]

At the same time, however, the WRA embarked on a disinformation campaign aimed at selling the formerly incarcerated on the need to return home. The authority used camp newspapers, such as the Heart Mountain Sentinel, to tell them that they would receive warm welcomes on the West Coast.

“The small ratio of relocated Japanese who may wish to return to the Pacific coast after the war ‘will find a warmer welcome because of the good record of Japanese in the American armies,’ Dillon B. Myer, national director of WRA, told Californians last week,” the Sentinel reported on 14 October 1944.[vi]

Many Heart Mountain Japanese didn’t believe the happy propaganda. After the federal government rescinded the exclusion order from the West Coast on 17 December 1944, formerly incarcerated Japanese soon heard through word of mouth and other reports about problems back home, such as that faced by the Takeda family of San Jose, who had recently returned from their incarceration at the camp in Gila River, Ariz.

On 6 March 1945, War Relocation Authority records show, arsonists set fire to their home and then shot at the family members as they ran outside for safety and to extinguish the fire.

“Joe Takeda home subjected to 12:50 a.m. night shooting and attempted burning by men in unidentified sedan who cut telephone wires and set fire to house and sheds with gasoline poured under home,” according to the account of the attack sent to Myer.

“No one injured and family of 10 evacuees put out fire with aid of rain,” the report continued. “One shot fired from car slowly cruising highway 75 feet away, 2 shots fired as it passed on 4th trip past. One revolver slug went over heads of 2 children on porch, lodged in bedroom wall. First incident case in Santa Clara Valley, Sheriff Emig’s office notified. 3 deputies arrived within 15 minutes.”[vii]

Higuchi did not realize it at the time, but one of the Takeda daughters, Thelma, would later marry his second-oldest son, Kiyoshi.

In Auburn, Calif., three Caucasian brothers set fire to the Doi family’s home. They had recently returned from being incarcerated at the camp in Amache, Colorado.

“Two civilian brothers and two brother AWOL from Army held in case before Superior Court for attempting burning and dynamiting and scare shooting at Sumio Doi ranch home,” the WRA report read. “Doi family has son in Army unit which rescued Lost Battalion. No one injured.”[viii]

The Lost Battalion was an Army unit made up of Texans that had been caught behind German lines in the Vosges Mountains of France the previous fall. Members of the all-Japanese American 442nd Regimental Combat Team fought for days to rescue them.

Asian Americans have long faced bigotry and false accusations from those who are ignorant of our culture and history. Like today, many were abetted by officials at the top of our government. Those officials and their agencies often lied about or covered up what they did.

It is not acceptable now, and it wasn’t acceptable then. Fighting it means demanding transparency from our government, finding allies, and fighting bigotry with facts and reason. The policies pushed at the beginning of World War II came from rooms in which only white officials were invited. We need a truly representative administration that includes all members of society to deliberate how policies are made and carried out.

Shirley Ann Higuchi is a Washington, DC, attorney and past president of the District of Columbia Bar. She chairs the Heart Mountain Wyoming Foundation (www.heartmountain.org), which runs an interpretive center at the site of the camp where her parents were imprisoned. She is the author of “Setsuko’s Secret: Heart Mountain and the Legacy of the Japanese American Incarceration,” which was published this year by the University of Wisconsin Press. Follow her on Twitter at @HiguchiJD.

[iv] Ray Locker, “Asian Americans need to speak out and stand up for themselves,” Pacific Citizen, 5 June 2020, https://www.pacificcitizen.org/stand-up/.